5 Financial Mistakes to Avoid Making in Your Fifties 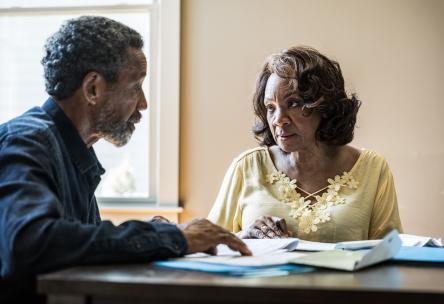 Planning for your financial future can be hard at any age. And if you’re struggling to save money for retirement, you’re not alone.

According to a 2019 study from Northwestern Mutual, about 22 percent of Americans have less than $5,000 earmarked for retirement, while 15 percent of us have no savings at all. And this lack of savings is a big reason why many Americans plan to work past the age of 65.

The good news is that there’s still plenty of time to plan for the future. Here are five financial mistakes to stop making today, so you can live more securely tomorrow.

1. You start planning for retirement too late.

Don’t wait until you’re a few months away from retirement to analyze your finances. “It’s critically important to understand your current assets and estimate your future assets, liabilities, income, and expenses to determine whether or not you’re on track toward reaching your goals,” says Mike Henzes, CFP, owner of Open Wealth Network in Pottstown, Pennsylvania.

He says clients expect to maintain the same standard of living they enjoyed while working even after retirement, but often they haven’t saved enough to make that happen.

To enlist some professional help, visit the National Association of Personal Financial Advisors (NAPFA), which can help you locate a financial advisor in your area.

2. You give money to your adult children.

“Parents can feel a need to help their kids and grandkids, who might be hurting financially,” says John Rossi, a member of NAPFA and a retired professor of accounting at Moravian College in Bethlehem, Pennsylvania. But unless you truly can part with the money, you might be putting your own finances in jeopardy.

This also applies to parents who take out loans for their college-bound children. “Many people in their 50s have kids heading off to college without having done any meaningful upfront planning to determine its affordability,” says Henzes. “It is very easy to accrue tens of thousands of dollars in student loan debt.”

Try to determine how much money you’ll owe on a monthly basis, says Henzes. For example, he says, if you take out $100,000 in student loan debt over 10 years at 7.08 percent, it’s going to cost about $1,165 each month. “That’s a sizeable chunk of money to cover as you approach retirement,” he says.

3. You haven’t taken any steps to protect yourself.

One of the biggest mistakes people make is not insuring their biggest assets such as their home, health, or life. If a major event occurs, it can have a drastic effect on a family’s financial situation, says Henzes.

“A disabling accident or health event can devastate your financial future,” he says. “Having sufficient coverage—life insurance, health insurance, long-term care, and so on—can help protect your plans and what you’ve worked so hard to save.”

Rossi agrees and adds, “Buy it when you’re young and it’s cheaper.”

4. You assume you’ll sell your house and downsize.

Now that your kids have moved out, your family-of-five house is too big for one or two people. But that doesn’t necessarily mean you’ll be able to sell it, downsize, and live off the profits.

“People expect to use the equity in their home to provide retirement income after they downsize to a smaller home,” says Henzes. “Conceptually, this makes sense. However, the reality is that 55-plus communities are in high demand and don’t come cheap. Oftentimes, they use a majority, if not all, of the client’s equity.”

Your best bet, he says, is to have a plan that will cover your expenses in case you end up staying in your current house for the rest of your retirement.

5. You aren’t keeping track of how much you’re spending.

Early on in retirement, it’s easy to fall into the trap of spending more money than you did when you were working. And we’re not (always) talking about big-ticket purchases like vacations.

“When you’re working, you’re busy working,” says Rossi. “But when you retire, you have more free time, so you go out to lunch more and spend $5 here and $10 there. It’s not a lot of money at one time, but it all adds up.”

That’s why it’s so important to make a budget and stick to it.

Nearing Retirement? Why You Should Consider an HSA

As we age, our health care costs will rise. This is a logical conclusion for anyone nearing retirement.

The million-dollar question: When is the right time to retire?

Remember: 65 is just a number

How to Manage Your Finances During the Holidays

Planning and creativity are key to enjoying the season without going into debt.