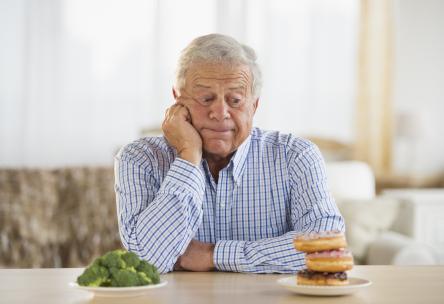 Senior discounts are great, but do you know how to make sure the early-bird special won’t leave you fighting off food poisoning? As we get older, our immune systems become weaker, and it’s harder to fight off germs. Getting food poisoning when you’ve hit the 65-year mark can be more severe or even deadly, or it can leave you dehydrated, which is a treat in its own right. Okay, so enough of the doom and gloom. Let’s get to what’s not on the menu (or shouldn’t be) anymore. Don’t worry, there’s plenty of good stuff left.

Some soft cheeses
It’s best to steer clear of any soft cheese that is not pasteurized or that has mold in it (like blue cheese). These cheeses are more risky, as they may contain more moisture and less acidity, which makes it easier for bacteria to grow. The list of potential troublemakers includes blue cheeses (all types), Brie, Camembert, and queso fresco.

Tip: Cooking these cheeses kills the bacteria, so you can eat them melted.

Undercooked eggs
Yes, this includes raw eggs, so homemade Caesar dressing, mayo, hollandaise sauce, raw cookie dough, and eggnog should get nixed. Runny eggs such as sunny-side up or over-easy count as undercooked, too, so stick to hard-boiled, over-hard, or scrambled prep methods.

Tip: Ask for your eggs to be cooked until both the white and yellow parts are solid. This goes for eggs from any kind of bird! (Ostrich omelet, anyone?)

Some deli meats
Deli meats that are not cooked—just cured and fermented—may harbor parasites. This includes salami, prosciutto, chorizo, and pepperoni. Others, such as cooked deli meats and hot dogs, can contain bacteria if they are not reheated before eating them.

Tip: Freezing uncooked (cured/fermented) meats for at least four days is an easy way to kill most bugs inside. Cooking them will do the same trick. Also, heat hot dogs and other lunchmeat to 165 degrees F or until “steaming.”

Raw meat, poultry, and shellfish
You know that handling these foods requires extra care—and that you need to avoid transferring raw juices from them to the plates that will hold them after cooking. But when we think of “raw,” we may not think of rare. Still, any bloody juices or pink meat can mean trouble.

Tip: Make sure meat and poultry are cooked to a safe internal temperature of 165 degrees F. Raw shellfish such as mussels, oysters, clams, and scallops can contain dangerous bacteria, so make sure to cook them thoroughly first.

Sushi and sashimi
Raw fish may seem like it would be on the hit list, too, but here’s a surprise: That’s true only if it’s made with fish that wasn’t frozen first! Freezing kills any parasites that may be inside.

Tip: If you’re ordering sushi, ask if it was from frozen, not fresh fish. Interestingly, this is one case where frozen is better!