Hot Brew vs. Cold Brew: Which is Better for Your Health?

Here’s what the science says—plus, five other ways to maximize your coffee’s health benefits 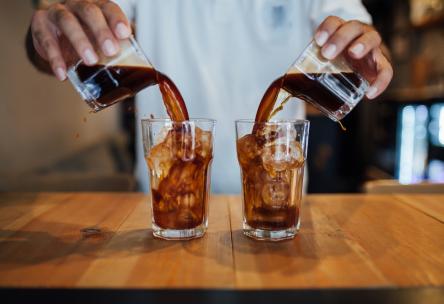 Scientists are waking up to the health benefits of coffee. Large studies suggest it staves off heart disease, diabetes, and some cancers. A cup of joe may even promote longer life. But what about the increasingly popular cold-brewed kind—is that just as healthy as hot?

Maybe not. When researchers in Philadelphia compared the chemical compositions of the two, they found that the hot brew contained 11 to 35 percent more antioxidants than the cold brew.

Antioxidants are chemical compounds that neutralize the damaging “free radicals” in the body that are linked to aging and disease. Coffee is rich in antioxidants, which may be one reason for its protective effects.

“You could find 200 articles about the benefits of coffee, but it’s implied you’re drinking hot-brewed,” says study coauthor Megan Fuller, Ph.D., a visiting researcher at Thomas Jefferson University. “So the question becomes, can we expect similar benefits to be conveyed to cold-brew coffee drinkers[?] And our data suggests there very well could be differences.”

The reason: Hot water may be more effective at extracting acidic compounds (including antioxidants) from the grounds, Fuller says. Increasing the water’s temperature boosts its kinetic energy. And the more energy that goes into the water, the more compounds it can remove from the grounds.

“It’s a bit like tug-of-war,” says Fuller. “That coffee grind, that physical matrix, wants to hold on to those compounds, and the water wants those compounds, too. Hot water can win that tug-of-war more often than cold water [can].”

Cold-brewed coffee, which is made by steeping coffee grounds in room temperature water for 12 hours or more, has time to tease out those compounds. But hot water exposure, even just for a few minutes, appears to extract more.

In the study, the cold brew was made using 72-degrees Fahrenheit water, and water for the hot brew was just off the boil, about 200 degrees. “In a chemical application, that’s a big difference,” says Fuller.

“I would drink neither of those cups of coffee,” Fuller notes. “But it did show us the difference.”

This doesn’t mean you have to stop drinking cold brew. Chances are, you’re mainly drinking it for the flavor and the caffeine boost anyway, not the health benefits. Just be sure you’re eating plenty of antioxidant-rich fruits and vegetables, too.

Some other ways chemistry may enhance your coffee’s antioxidant potential:

Expert tips from a dietician to help you drink wisely.

Here's What you Need to Avoid

A perfect drink to have while cozying up to the fire.