Everything you need to know about this healthy beverage 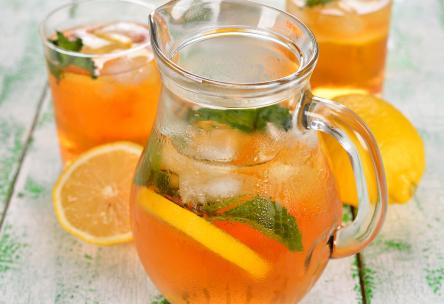 A cold beverage hits all the right spots on a hot day: it hydrates, it cools, it refreshes—and depending on your choice it may do a lot more. “If you are choosing an unsweetened iced tea, whether it be black, green, white, oolong, or herbal, you are making a smart beverage choice,” says Ayla Withee, MS, RD, founder of Eat Simply. “For those who have trouble drinking enough water, especially during the hot summer months, the flavor may really help with getting in your fluids.” And there are health benefits to be gained from different kinds of teas and the antioxidants they contain. “The antioxidants and flavonoids in all types of teas are especially protective of the heart and help fight cancer,” Withee says. “There is much anecdotal evidence that tea provides benefits such as relaxation or clarity of mind, but in the last 10 years, science has proven that there truly are cognitive benefits of tea too.”

Of course, those benefits don’t offset the calories and sugar in a bottomless Big Gulp of southern sweet tea, so unsweetened is always the best way to go. And don’t think that monster bottled iced tea is any better for your body than a soda. “There are many varieties of sugar-sweetened bottled iced teas,” Withee says. “For example, Arizona Iced Tea (original flavor) has 18 teaspoons of sugar per bottle! That is three times as much sugar as a woman should have in an entire day.” The great thing about tea is it can have delicious flavor without the calories and sugar, making it the perfect companion to a healthy meal. “I personally really like Starbucks' passion iced tea, which is caffeine-free and is sweet and tangy without any added sugar,” Withee says. Your best bet for your budget of course is brewing your own. Here’s your primer to the most common types of tea:

Black Tea
The Brits have long been on to something good. Black teas like Earl Grey and English Breakfast use fermented leaves that are not only delicious and comforting but also boast a bunch of health benefits. Everything from anxiety reduction to memory and attention span to heart health have been attributed to these little leaves. “Black and green teas contain an amino acid found almost exclusively found in the tea plant called L-theanine,” Withee says. “There’s evidence to suggest that L-theanine stimulates alpha brain waves at rest, which are associated with relaxation. Additional research has shown that L-theanine in combination with the caffeine found in green and black teas improves attention.” Research also shows black tea can lower LDL (bad) cholesterol and blood pressure. High consumption of black tea has also been associated with low rates of diabetes.

Green Tea
Green tea leaves are steamed after harvesting and contain high concentrations of the potent antioxidant EGCG. That’s the compound responsible for most of the claims you’ve heard about green tea in the last decade, including, green tea can improve attention, memory, blood sugar stability, cholesterol, and blood pressure; that green tea also has the potential to aid weight loss; and green tea can prevent and fight various cancers like prostate and GI and eye diseases like glaucoma. Whether you’re feeling scattered or flustered or a little overweight and out of shape, a glass of iced green tea may be just the thing you need. Just know that it usually contains caffeine (up to 40 mg per cup). “If caffeine is used heavily (more than 500 to 600 mg a day), or by those who are particularly sensitive to caffeine, it can send the central nervous system into overdrive and result in negative effects like insomnia, nervousness, restlessness, irritability, stomach upset, fast heartbeat, and muscle tremors,” Withee says.

White Tea
Although it’s less popular and less researched, white tea is made from the buds and leaves of the Camellia sinensis, the same evergreen plant used to make green and black tea. They are picked early and steamed soon after harvesting to prevent oxidation of the antioxidant polyphenols before drying. Because white tea is less processed, it retains more of the active compounds thought to have so many beneficial effects. Its potent antioxidants, like green tea’s, have been shown to have potential for protecting skin from ultraviolet light. White tea may also help with weight loss by inhibiting the generation of fat cells.

Herbal Tea
Although technically not “tea” since they don’t come from the same plant, herbal teas are caffeine-free, prepared similarly, and have benefits worth mentioning. “Ginger or mint tea can settle an upset stomach and ease acid reflux,” Withee says. Echinacea is widely known for its potential immunity benefits, and Chamomile, for its calming effect. “It is important to realize that herbs can act as strongly as medications and negatively interact with medications,” Withee says. “Work with your physician or registered dietitian to ensure that what you are drinking is safe.” She notes pregnant women especially shouldn’t assume that because it’s herbal it’s safe for them, because there are many herbal teas that are not.

Brew Up a Cup
“I make iced tea all summer long,” Withee says. Here’s her simple method: Boil a large pot of water and toss in some tea bags. “I like to mix different flavors together, adding green tea along with fruity herbal teas,” she says. Make it strong in flavor so that when you add ice, it doesn’t become watered down. Make a big batch, pour into a pitcher and chill in the refrigerator. When you want a cup, fill a glass halfway with the tea and add ice.

Wind down before bed with this 5-step relaxation routine.

Ways to change your diet to help prevent inflammation and disease