Here's what you need to avoid 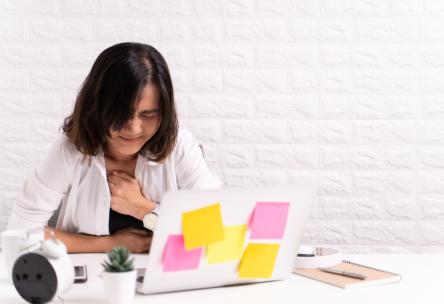 Most people who suffer from acid reflux—aka heartburn or gastroesophageal reflux disease, a condition where stomach contents rise into the esophagus—know not to eat foods high atop the trigger list: citrus fruits, tomatoes, and most spicy, fatty, or fried foods. But what you’re eating (or not) doesn’t tell your whole healthy-stomach story. Beyond just foods that irritate your stomach, other ingested substances irritate the GI tract directly or trigger acid production to cause more irritation. In some people, these can be more problematic than trigger foods. While it’s always a smart idea for heartburn sufferers to watch what they eat, it’s also important to pay attention to certain other things you’re putting into your mouth.

Alcohol
It’s not breaking news that heavy drinking can lead to a host of health problems, but even small amounts of beer, wine, and spirits can be a gut-buster. Alcohol is a direct irritant to the GI tract, and for some people, even one drink could lead to a painful situation. Research shows that the more you imbibe, the more likely you are to have esophageal problems. If abstaining entirely isn’t an option you’d choose, stick to the generally recommended one drink a day for women and two drinks for men.

Caffeinated Beverages
We don’t like to be the ones standing in between you and your morning coffee pot, but according to the American Society for Gastrointestinal Endoscopy, caffeine relaxes the lower esophageal sphincter, which is the muscle valve between the stomach and esophagus that makes the contents of your stomach stay put. If that valve is not working properly, food can flow back up into the food pipe. The amount and type of food and drink already consumed, medications, and other underlying medical conditions all impact how strongly coffee can affect you.

Over-the-Counter Pain Medications
You take pain relievers to alleviate one kind of discomfort, but unfortunately they may bring on another. Ibuprofen (Advil, Motrin) is one of a class of medications known as non-steroidal anti-inflammatory (NSAID) agents, which also includes naproxen (Aleve) and these drugs can irritate the lining of the stomach on contact. A French study found that both NSAID and aspirin use was a significant risk factor for reflux symptoms. Prescription NSAID drugs (Celebrex and others) also can cause gastric issues. If you’re taking any of these medications and are having acid reflux symptoms, talk to your doctor.

Mint
While peppermint tea may help soothe your nerves, the mint may also relax the valve of your lower esophageal sphincter, leading to acidic backwash. While there is some research that suggests that chewing gum may actually help improve reflux symptoms because it makes you swallow more frequently, make sure you choose a different flavor. Regular suffers of reflux should stop consuming any products that contain mint.

Challenge yourself to get in shape, your way

Medications that increase the risk of falls: How to stay safe

How to know if your prescription is putting you at risk of falling, and ways to get help