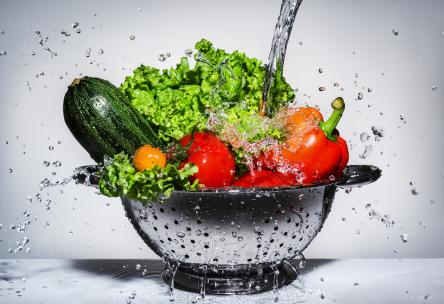 Every year, it seems like different types of produce and meats are stricken with bacterial pathogens because of poor handling practices—one year it's alfalfa sprouts, the next year it's peanut butter—it's always changing. Not surprisingly, one out of six Americans contracts a foodborne illness each year, but it is something you can usually prevent. "People have to keep in mind that the food is not necessarily bad if it's implicated in an outbreak," says Robert Gravani, PhD, professor at Cornell University and director of the National Good Agricultural Practices Program.

Just because spinach is recalled once doesn't mean that spinach as a whole should be blacklisted. It simply serves as a reminder that, regardless of what you're eating, you should take control of the opportunity to clean and prepare your food properly, so as to limit your risk of getting a foodborne illness. While produce recalls tend to occur because of exposure to bad-for-you bacteria during handling, for most foods, it's about your actions as a consumer. "Almost 20 percent of all foodborne illness occurs during the preparation at home," Dr. Gravani says.

To avoid a foodborne illness and its symptoms (including vomiting, diarrhea, and, in some cases, extreme illness or death), Dr. Gravani recommends four simple steps: clean, separate, cook, and chill.

Steps to Safety
"The thing to remember is that food safety really begins during shopping. We're kind of in a hurry when we shop for food," Dr. Gravani says. When you're perusing the aisles, fill your cart in this order: non-perishable foods (including unrefrigerated produce), then refrigerated/perishable items, and then frozen foods. Then, head straight home to put the food in their appropriate storage places (that means picking up your dry cleaning before your supermarket run!). After you're home, follow these four steps from Dr. Gravani:

1. Clean: For produce, meats, and all non-packaged foods, exposure to pathogens is possible during handling, so cleaning the foods before storage is key. Produce should be thoroughly washed and dried. Poultry and meats should be wrapped in plastic bags to prevent leaking, and kept separate from other foods to limit possible contamination. Use separate cutting boards for raw meats and produce, and wash cutting surfaces thoroughly with hot water, soap, and a disinfectant between uses, Dr. Gravani says.

2. Separate: When you're grocery shopping, keep raw items like produce and meats in different parts of the grocery cart—and use plastic bags to double-wrap raw meats. At home, designate parts of the fridge for certain foods, like keeping meats separate from anything that you may eat raw (so no pork next to your salad greens). Keep the fridge temperature at 40 degrees or lower—but not below freezing, as that can degrade produce quality.

3. Cook: Tried-and-true techniques like cutting open a piece of chicken, testing for doneness with your fingers, and then taking a test bite don't measure up in terms of safety. "The only way to determine if [meat] is thoroughly cooked is with a [meat] thermometer. It's easy to use and that's the best way to tell," Dr. Gravani says. A hamburger is done at 160 degrees, but one out of every four hamburgers that is cooked turns brown before it reaches the safe temperature, he notes. Meat thermometers will have a chart for appropriate and safe cooking temperatures.

4. Chill: In warmer weather, be wary of food that's been sitting out for a picnic. The maximum amount of time that cooked food should be left out without refrigeration is two hours (one hour if the temperature is over 90 degrees). "Functions where the food stays out are far more risky than [those where] foods would be properly refrigerated," Dr. Gravani says. If you're traveling, whether out to a picnic or simply taking food to go, put food in insulated bags or in a cooler with ice or reusable ice packs. If a car trip is going to be longer than two hours in the summer, remember that the car will heat up. Buy food on the road instead of packing a picnic, but if you decide to bring food along, use extra ice packs to keep food cold.

For a more detailed listing to maximize safety, Dr. Gravani recommends the USDA's Kitchen Companion. "Keep the [foods] clean, separate them appropriately, cook them thoroughly, and chill them rapidly,” he says.

Get toned and stay cool in the great outdoors

A simple, protein-packed wrap that's good for a healthy mind