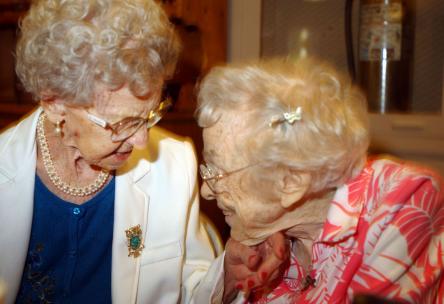 There’s at least one in every community—a silver-haired wonder who is up at dawn without fail for a daily jog, or is the life of the weekly bridge game, or is maybe even a YouTube sensation, like 92-year-old German gymnast Johanna Quaas. We look on with awe—and wonder what in the world we’re doing wrong. But perhaps the better question to ask is, “What are they doing right?” We asked some inspirational and active nonagenarians and centenarians how they account for their lengthy lifespans.

EARL ANDERSON, 102
Earl Anderson has lived through the Great Depression, faced combat in World War II, built and ran a successful business, and managed to win a wall-full of bowling trophies along the way. “What’s my secret? I don’t know that I have one, other than that I didn’t have anybody bossing me around,” he says with a laugh, pointing out that he has never been married.

No, Anderson isn’t serious, but with that statement he did reveal at least one reason for his longevity: Laughter. The Shickley, Nebraska, resident lives in his own home on the outskirts of the small farming community, population 329. Every day he’s looked after by a small circle of relatives and neighbors who join him for meals, accompany him on errands, and take time to revel in small talk and fond memories.

“They keep me laughing, and that’s what I’ve always tried to do in my life. I try to have a lot of fun,” says Anderson, who was still bowling into his late 90s, when his knees finally started bothering him. “Oh, I have had some good times over the years. You know what, I’m having a good time right now. I woke up, made myself some coffee, and now I’m talking to you and enjoying this. I get along just fine.”

What the experts say about the importance of laughter: Studies show that older adults enjoy humor more than their younger counterparts, but that the opportunities for a good laugh aren’t always as prevalent as you age. Other research shows that a daily dose of humor improves short-term memory in older adults and has heart-protective benefits. The takeaway: Find ways to laugh often.

LOLA & ARTHUR WEISS, 92 and 96 (respectively)
Lola Cummings Weiss was born in 1926, the same year that the infamous Route 66 opened, Harry Houdini performed his last magic trick, and Gertrude Ederle became the first woman to swim across the English Channel. But fun historical facts don’t leave much of an impression on Lola. That’s because she and her husband Arthur prefer to live in the moment.

The two are the living definition of active retirement: At home in New Paltz, New York, where they live in a continuing care retirement community, the Weisses pack their days with activities and friendship. Together, they swim three times a week, and take frequent trips to New York City (where they raised their three kids) to visit museums and see Broadway shows. Independently, Lola, a retired music teacher and international tour-group organizer, is part of a performing arts group within the community and enjoys a lively current events group. Meanwhile Arthur, a retired dentist, is part of the Spanish club.

“We stay busy,” says Lola. “There are so many wonderful opportunities in life; we don’t want to let any of them get past us.”

What the experts say about the importance of living in the moment: Having hobbies and pursuing interests do more than keep you busy in retirement—they keep you healthy, too. Research shows that daily activities that engage the brain can help boost and protect brainpower as you age. Even better if some of those hobbies include physical exercise, since multiple studies have shown that regular exercise helps older adults by improving balance, maintaining flexibility and muscle mass, and lowering the risk of dementia.

Aim for a daily dose of this mood-and-health booster

5 Surprising Facts About Health and Happiness Through the Decades